IMMERSION OF CORPSE of the “MAHA-PURKH” into the water- IDEA not practiced by the Guru Sahibs– DERAS allowed experimentation against the “settled basic traditions”–Competitive “Political fear psychosis” providing “advantage” SANT  SAMAJ….Introspective SGPC participation

The pious soul of Sikh Guru Sahiban when left humanely bodies for the .. heavenly abode, were all cremated in continuity of the prevalent traditions with exception to Fifth Sikh Guru Sh Arjan Dev ji. The fifth Guru was compelled by Governance of the Mughal emperor Jahangir by demanding that “Guru Arjan revise the Holy Granth, removing all references to Islam”.  The Guru of course refused to do so...Since Jahangir was on his way to Kashmir, he asked Murtaza Khan to deal with the Guru. Murtaza Khan immediately jailed the Guru, and ordered the Guru Arjan to be tortured to death if he did not agree to remove the alleged derogatory references in the Holy Granth. He was made to sit on a red hot iron sheet. They poured the hot sand on his body. The Guru was dipped in boiling water. The GURU bore all of these brutalities with calm serenity, for five long days he was tortured. When the torturers found the Guru “unresponsive ” to their torture they did not know what to do.The history reveals  that it was planned to wrap his body in cow skin as a …..extreme step…On May 30, 1606 the Guru asked for a bath in the river Ravi by the side of the Mughal fort. Thousands of followers watched the Guru who could barely walk make his way to the river. His bare body was covered with blisters, The Guru Arjan continued repeating…….”Sweet is Your will, O God; the gift of your Name alone I seek.” The Guru then calmly walked into the river water, bidding his farewell to his followers and was gone forever, his body carried away by the currents. 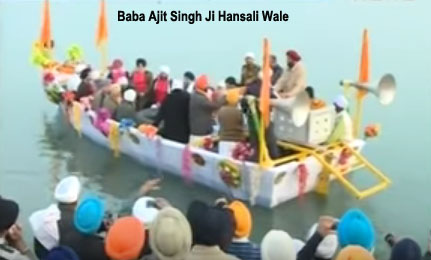 Sant Ishar Singh, famed as RAREH WALE, had willed to be immersed   in the river after death and his body was put in Box with few holes, so as to allow water born animal kingdom to make use of the flesh. His body was pushed into the ….Sutlej near Gurudwara Baphaur Sahib, Sri Anandpur Sahib, …..similarly the body of the Sant Ajit Singh;” Hansali Wale” .. has been immersed  into the flowing water on 3rd Jan 2015.

One of the English news paper … printed in Chandigarh region constructed information …. that body of respected  saint if not given “conventional treatment ”  ..but immersed  in water is due to certain Nirmala sect, …….. adopted ideas of Benaras. The paper wrote,”The tradition is uncommon and nearly unheard of in Punjab as such rites, according to the tradition, are reserved only for “mahapuraukh (enlightened saints) belonging to some sub-sects of Nirmala traditions of Sikhism. Referring scholars of the theology  paper further wrote,” such a practice originated from the belief that the bodies of “enlightened souls” should serve nature even in their death. The views of Dr Sarabjinder Singh professor of theology carried are that,” The practice of ‘Jal parwah’ of saints is a tradition of Nirmala sect. This tradition not to …. consign a body to flames was popular among saints of Benaras, this tradition was subsequently ….. imported to Punjab by Sikh disciples, who later came to be known as …..Nirmalas. This tradition is restricted only to saints but not common among other followers of Nirmala traditions. The safeguard -protection of inherited Sikh values during the period of Mughal-Sikh-British Governance periods were taken care jealously and most Punjabis volunteered to support the efforts.

The New India CHAPTER has changed scenario to great extent and a large number non – Sikhs in Punjab look to the IDEAS of majority Hindus residing in “other India, ”   although practicing different cultures – languages but feel united on common IDOL WORSHIP identities. Thus a part of Punjab population, standing half way of Sikh ways of life, being in the middle path of Punjabi as Hindus having some Sikh faith relatives, many a times encounters complexities in conduct of their  lives ….”post 47 made India.”.  Many a Sikh leaderships also keep on “dangling ” between both cultures for day to day (Political) life ….. providing confused signals to the Sikh Masses…  !

Hence the accidental situations created……. such as above having carried out tactical -“silent support ”  of the institutions like SGPC, is believed questionable. S.G.P.C. was plate-formed on great martyrdom. Their participation requires …… meaning full introspection …..for future guiding path to settle anxieties of the common Sikh Diaspora.      Guru Sahib advised us to believe and practice the ways of their actual life, including faith   ….  in SHABAD BEING GURU ….  but many of us are drifting away out of certain fears.

The modern (media insertion) title ‘mahapurakh’ may not make any one superior to “The Ten Gurus”   None of them expressed …. Immersion of the dead bodies  into the  water …. after humanly exit……. The S.G.P.C.  may have to educate all of us on all such traditions – The recent rituals of  the dead – body immersion of a saint on 3rd Jan 2015 may not be considered  to be  doctored by ….. the Sikh Guru Sahibs. “Ideologies ” containing suspicious elements,…. creating confusion in the Sikh way of life …… must be distanced by the SGPC.