MEDIA will keep INDIA busy for some time, deliberating one personality-Mr MODI, the P.M. who is operating like a Presidential kind of Governance. The MEDIA, in last about three decades, has successfully positioned to be principal anchor on moderating public opinion on Government performance. The owners of business Media in turn brief on principal angles in conduct of interviews. Thus the Media Politics may scrutinize his decisions in terms of welfare utilities. Punjab has solemn responsibility to list out the promises made, visa a vis actual quality & quantum of deliveries in respect of ASSURANCES provided in the MANIFESTO. The International Indian objectives, of course may have to undergo long term gestation period for 3 – 4 years time for genuine evaluations. One year may be found too short to review performance on FOREIGN AFFAIRS. He may have encountered numerous diplomatic complexities while dealing with developed – developing, Asian, European or in specific neighbour countries. The productiveness for the tours may be visible through future business, co operation on Indian security concerns & generic diplomatic conduct etc. 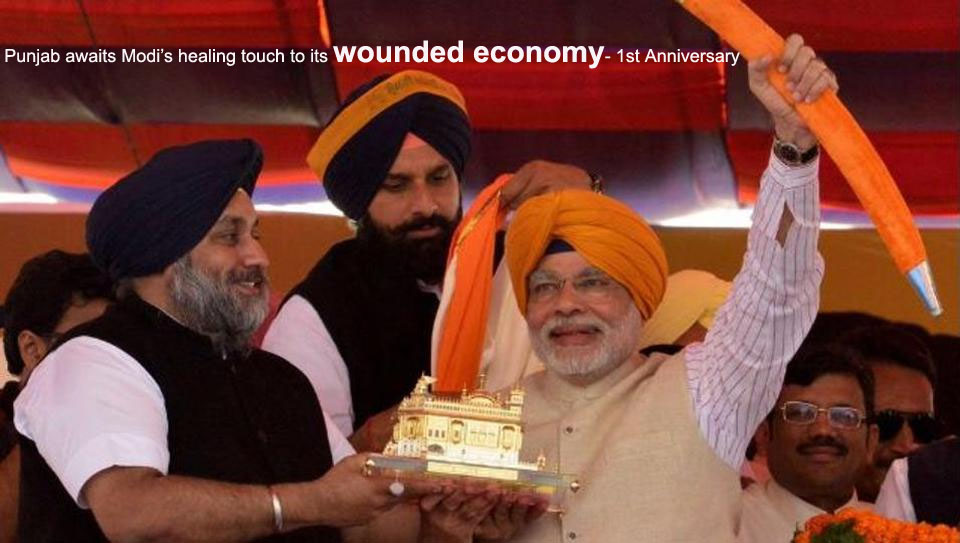 The states of India may have their own norms to view the performance. PUNJAB may deliberate on its long pending POLICY FRAMES related to; FARMERS-STUDENTS-UNEMPLOYED, SICK PATIENTS-EMPLOYEES-ARMY PERSONNEL-AGED-INDUSTRY-TRAVEL CRISES – FUNDAMENTAL SAFETIES- JUSTICE TO 1984 INJUSTICE, PEACE WITH NEIGHBOR COUNTRY for mutual growth- Solutions to SGPC election notifications, Boarder land route trade, Water resources & tangles on natural rights, Capital territory conflict & transfers, Chapter of SGPC outside Punjab, Difficulties encountered by PNRI’s abroad & on Home states in India etc. And the degree of “ACHIEVEMENTS- IMPROVEMENTS- CORRECTIONS- MODIFICATIONS in terms of friendly COMMITMENTS made by biggest brother with them. Punjab need to crystallize the honesty brought in by Delhi to meet out the essential public needs and the quantum of relief provided on above complexities.

The 50 days intermittent fast foreign travels undertaken by the P.M., visiting 18 countries may automatically have been identified with his performance, if his ministerial team enjoyed his natural confidence or delegated enough for improvements in delivery of services on home grounds. Mrs Indira Gandhi incidentally also functioned in similar style. She carved out her own unique international leadership identity. But, she unfortunately made many blunders, including none balancing of international relationships, displaying closeness to RUSSIAN BLOCK and distance from U.S.A. group. She excelled on most Global diplomatic FORUMS but unfortunately was not that successful on domestic Politics handling. The PUNJAB state has to regularly fall back on New Delhi begging economic support for day to day Governance. Thus, state leadership may or may not formally admit, but the publicized conditions conveyed that Punjab is yet to gain confidence or FEEL of POSITIVENESS, corresponding realizations to the above VISIONED MISSIONS & PUBLIC COMMITMENTS.

An eminent historian also expressed on Ministerial powerlessness of most RAJ DARBARIS and connected with the conditions for the regime of MUGHAL & BRITISH Governance on India. Nobody except few is authorized to talk with media, explaining strength & weakness in the present Govt. The holistic stick of party discipline or being partner political party with Governance is fully misused to silence the best of best & tallest leaders. The Presidential kind of operative cultures, are allowing limited, in house questioning on Governance, now completing its JOURNEY OF ONE YEAR, today on 26th May. The corridors of Power centres in Punjab are budging with another voice that senior most politician representing state, whenever earlier visited New Delhi, was better treated by the office of previous P.M. & by most of his ministries.

The Punjab H.&E. Foundation, during ELECTIONS-2014 TIMES, cautioned that Punjab may continued to be dealt in the old routine, or with introduction of many more discriminatory ideas under new Government. Most of the demands of the states are technically addressed, corresponding to their strength of respective political parties or states in the Parliament. The opposition generally DRUMS up their own music, condemning every action of the opposition, irrespective of its quality. They are exhausted on sensible criticism, now down to discussing SUIT-BOOT, forgetting luxuries of Nehru-Indira ERA. It is an admitted fact that Mr Modi has acquired an international brand image and may continue to enjoy faith of those who elected him and his team. The public otherwise has developed their own FILTER mechanism, differentiating the inserted or crafted NEWS items. Public generally display their mind only on subsequent opportunity of VOTING. The public displayed reactions recently on arrogance inculcated in BJP through elections of N. Delhi.

Moving back to the original agenda was to find out to what degree, the (Modi) central Government is being believed to have been found useful by natives of Punjab. Mr P.M. publicized new idea on foreign lands, stating; India is bringing in new concept, “CO OPERATIVE FEDERLAISM”, but SOP is yet to be prepared. The POWER of Federalism will also ultimately be influenced by number of M.P.’s and PUNJAB mathematically (13/542) is poorest among the poor, hence may continue suffering. Punjab has been looking forward since 67+1 years on the promises made to be implemented. But none has taken in account the concerns and worries of the bordered-Agro crises for corresponding solutions. Public has been watching sincerely, the failing generic quality contents in delivery of central & state public services. The important Manifesto commitments for regulating Prices of common man necessities, bringing in ACCHE DIN, drummed up during the voting, rekindled extra FAITH in Mr Modi- BJP platform, but FAITH is fast diminishing with passage of time.

The failures of Congress Governance, supplemented with certain catchy political declarations, influenced the formation of Government by BJP, such as; Retrieval of 15 lack Cr. Black Money and its sharing with public, Corruption free regime, correcting economic & national security fault lines, mending centre v/s state relationships, Development-in Education-Health-Technology skills leading to ACCHE DIN, employment boom etc. But the country Head preferred focusing foreign during first year of Governance than to correct health in states. He is alleged to have not spent sufficient time on internal India, in context of deliveries on promises. The diplomatic strategist in addition, displayed concern for the faulty opening to all foreign Windows & Gates. The leadership could have visited few select countries, avoiding travel to all. But he seems to be in great hurry for fastest commercial corporate connections.

The Akali Dal & BJP in Punjab cadres displayed dreamed-imaginative thoughts during election 2014; declaring FUNDS on installation of BJP in ND will be brought on Truck loads to improve the life for the natives. But now leadership in reality is finding difficulties even in getting meeting time from busiest P.M. schedules. Whatever the development is seen is a matter of routine part of Governance. It is a hard reality that Akali Dal represent a TINY numbers of M.P.’s, although belongs to a significant community segment, thus are also awarded a TINY Ministry by BIG political partners. The action of BJP is not justified in the background of history forgotten when Jan Sangh had once won only 2 MLA seats and Srd P.S. Badal made both of them cabinet Minister with significant portfolios of Finance- Industries to them.

Punjab Leadership is also caught in another complex situation on undesirable/untimely introduction of Land Bill. The impact of new Planning body & GST may also not be useful to the state. PUNJAB is caught in complicated web of its own- who can neither leave, nor live with the present suffocating Politics for a long time. The dreams for equality through COOPERATIVE FEDERALISM, is just a political statement, but in actual meant to cement the majority (idolaters) along with dismantling of platforms controlled by religious Minorities. Therefore, the political PROMISES are meant to be broken, like Pandit J.L. Nehru who declined to honour even his personal assurances made with SIKH Diasporas. Only GREAT, BIG PEOPLE- PERSONALITIES or NATIONS could stand for their PROMISED words but not……. everyone…….. Anyway, Punjab may like or not but Mr MODI and his team are now closet to business corporate world, resulting in; Acche or Bure Din … & is a FACT OF LIFE TODAY…..Wishing Mr Modi GOOD LUCK and Punjab may enjoy dreams for magical TRUCK LOADS OF CURRENCY, in next 4 years or organize its landing, puncturing International borders……………..?