An eminent Punjabi columnist personality, Mr Kuldip Nayar, wrote a column in Tribune-April 2015, “The resolve of composite culture lovers is weakening. Religion is having the upper hand. Both the Kashmiri Pandits and Punjabi Hindus have no future. The valley is claimed by the Muslims and Punjab by the Sikhs.” Punjabi Khatri Hindus & Brahmins between 1849- 1999 identified themselves absolutely with Co idolater of other India but now Mr Nayar has displayed clever twist to echo comparative future homelessness. He spilled out his mind & heart representing misguided Punjabi Khatris, practicing faith in idol worship. These very actors lead to partition of Punjab in 1947 & than bifurcation in 1966. 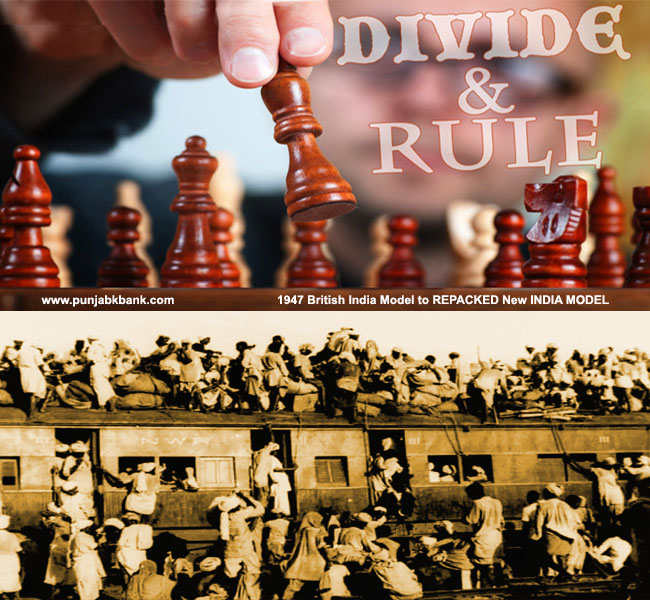 PUNJAB NATION: The visitor from other INDIA to PUNJAB was foreigners till British annexation-1849. The religiously political visitors performed role being IDEOLOGICAL INVADERS representing Hinduism. They reinforced relevance of life, identifying with continuity of IDOL worship. Many of them dissuaded Punjabi families to disconnect Sikh ways of life. They had MISSION for economic exploitation & slavery of Punjabi civilization in one form or the other. The actions of certain religiously political leaders alleged to have resulted in seeding for divisive linguistic _religious seeds in Punjab by such as; Pandit Mool Chand Tiwari- renamed Swamy Daya Nand, Mr MDKC Gandhi, Mr J.V.Patel from Gujarat, Pandit Narendra Nath Datta- renamed Swamy Viveka Nanda from Bengal, Pandit Madan Mohan Malvya, Pandit J.L.Nehru, Mrs Indira Gandhi representing U.P., Mr Gulzari Lal Nanda migrated Punjabi settled in Maharashtra etc. The Indian Political leaderships who had multiple religious faiths or no specific religious faith like Mr RAJIV GANDHI, being a son of a Parsi Muslim brought his own kind of destruction, in line with old anti Punjab -anti Sikh ideologies, practiced by his maternal grandfather & than his mother.The thought process inculcated among Punjabi Hindus in post Ranjit Singh Era by other India dragged them away from SIKH ways of life. North Indian JATS were also misguided with new religious lessons, but now they are neither practicing Hindu customs, nor observing the art of ARYA SAMAJIS. Hindu NGO teams of India promoted many Khatri ICON faces in Punjab like; late Lala J.N. Chopra, Mr R.L. Bhatia, Mr Gujral, Mr Munjal, Mr Ashwani Kumar, Mr Sekhri etc. for Politics. Some of them were reportedly highly motivated & assigned questionable objectives, implementing divide & rule designs, originally positioned during British ERA. Most of Media & intellectual scholars fail to display adequate gratitude, for Sikh martyrdom of three centuries, shaped in protection of HINDU PRIDE.

IDOL WORSHIPERS’ platform now reinvented DREAM IDEA to unite and bring back all those, who adopted other faith, likes; Muslim, Christian & Sikhs to Hindu fold. It may be a part of nature’s own life cycle that new consciousness in Hinduism wish to clock back historical hurts which appears to be misplaced or dangerous adventurism. The energies if directed towards positive developmental side may help INDIA to be a Nation, but we have yet to start JOURNEY on this road map. Punjab must take cautious steps declining not to be coming under illusions of faked half hearted BALLE- BALLE, having already paid heavy price in 1947/1962/1971/1984. They need to caution other India to stop exploiting PUNJAB emotionally by faked dramas. The real picture from pages of history conveys that they continue suspecting Punjabis, in new India. They first incite & create a situation for future collateral intentional damage to all without difference of caste creed.

PUNJABI SOCIETY by & large cultured themselves in a unique civilization during historical journey of last five centuries. The change technically came with revolutionary poetic declaration delivered by divine power, Sh. Guru Nanak Dev. Guru Sahib protested before ALMIGHTY for barbaric killings of humanity in Punjab & other parts of present India by invader BABAR- Arab Muslim. The consecutive nine spiritually social reformist Guru leaderships continued MISSION by guiding the society to stand against exploitative nature, rituals customs forced upon by internal & external forces. The holistic globally educative knowledge in the shape of ADI GRANTH was positioned in 1604 & adopted being Guru in 1708. Late Sh Ambedkar in the capacity of chairman Indian Constituent Assembly expressed that India do not need separate constitution, having already privileged for Shri Guru Granth Sahib. He declared that best of best components available in the whole of the world constitutions cannot come close to the WISDOM & HUMANLY JUSTICE orientations imbibed in it. The finally amalgamated Indian constitution failed in almost all major social challenges. Most of the leadership in pre independence ERA controlling the fate of Punjab belonged to other India and were equipped with legal knowledge being clever barristers.

PUNJAB CIVILIZATION originally had majority population represented by Muslim faith during the Governance of Ranjit Singh, who died in 1839.The British annexed Punjab with help of alleged treacherous role of (Hindu Dogra) P.M. just within10 years of his death. India was already under indirect controls of British through East India Company for two centuries by 1857 and resumed direct Governance controls in 1858. One major part of Muslim population succeeded to establish Pakistan. The faith family of Gurus branded as Sikhs living in Punjab, faced calamity of getting uprooted from their own MOTHER LAND. Politics of other India failed to shed a tear over TRAGEDY happened over the unprecedented division of populations and land boundaries. The partition was not wish of those getting divided, but the conspiracy was designed by the co idolaters of India. The plotters were controlling & pulling string for their own future commercial interests. PUBLIC is never privy to mastered inside political nature conspiracies. British plan was to leave India in 1948 but advanced to 1947 on behest of those, Nehru-Gandhi-Patel, who later occupied top governance positions.

The REVOLUTIONARY lessons for the period of Guru Nanak Sahib (1499) to Guru Gobind Singh (1708) were followed religiously during times of Baba Banda Singh Bahadur (1716) to the times of Ranjit Singh (1839) which brought new life in the Punjabi society. The fundamentals imbibed in the Holiest Adi Granth were meant to guide the largest number of Global/Indian society but the religious zealousness limited great knowledge as of now confined to Sikh community. The discipline of new life emerged from martyrdom of many hundreds -thousands between1499-1799. Select intellectual Hindu minds under psychological insecurity during British Principalities of Bengal-Maharashtra -U.P. introduced between1800-1950, many Hindu NGO’s. But they dared not confront MUSLIM or CHRISTIANITY but targeted specific northern race groups, who were adopting Sikh way of life like; Rajpoot, Jat, Punjabi Khatris etc. But they displayed zero interest in promotion of ideologies among under privileged S.C. or B.C. categories. Hindu platforms orchestrated ideologies as; SANATAM DHARAM, BRAHMO SAMAJ,DEV SAMAJ, ARYA SAMAJ, HINDU MAHASABHA, JAN SANGH, RSS and B.J.P. The common journey of these religiously political NGO’S was to bring IDOL worshipers on one platform. The partition of Punjab civilization in 1947 was the major ACTION EXPERIMENTED by Bengal-Gujarat -U.P Politics.

DURGIANA TEMPLE COMPLEXITIES: The History is evident that British exploited the role of Mahant cultures in Sikh Gurudawara managements. They conspired positioning few idol features in Parikarma of Durbar Sahib, which were removed after reformist movement. British then politically incited Punjabi Hindus, facilitating establishment of DURGIANA Temple tactically in context of Durbar Sahib. The HINDU platforms working in other Indian territories also contributed significant role in creation of mistrust among Punjabi civilization. G.H.S.M. Kapoor under the guidance of Hindu Mahasabha promoter, Pandit Madan Mohan Malviya, laid foundation of Mandir in 1925 at Amrtisar. Incidentally, Hindu Maha Sabha never formally opposed British rule. Durgiana Mandir has many IDOLS for Hindu Gods & Godesses. The undisputed Hinduism history states; LOV & KUSH along with Mata Sita, at the time of Ashavmegh Yagh, spent their childhood at the Ashram of Maharishi Balmiki at Ram Tirath in Amritsar. The normal need of a MANDIR may have been met by constructions in 1925 at Ram Tirath!

The BRITISH succeeded to position a Mandir with political interest for divide & rule of idolaters v/s none idolaters. The natural wisdom if Hindu diasporas applied may have suggested development of historical valued Ram Tirath. The place deserved to be identified being most respected Hindu pilgrimage other than AYODHY in U.P. The British politics wanted creation of competitive illusions between Durbar sahib & Durgiana Temple. No sensible Punjabi Hindu has introspected nor questioned Indian idolaters for the FIRE planted, which continue simmering, yet to settle down despite so much blood bath 1945 – 1995. India Kartikeya Mandir: Punjabis are not borne conspirators and rather natural humble, innocent, though historically groomed as warriors, for geographical conditions. They may view history of another unattended Mandir, established near Batala, in Punjab. This land location has immense historical mythical values from Hindu point of view but not allowed to be developed by cleverest conscious/unconscious minds of other India. Epic story in circulation conveys that once Narada, on visit to Lord Shiva offered gift of fruit Mango, but South India refers it was a Laddu of wisdom. Lord Shiva wanted to divide by sharing with Parvati but advised gift not divisible. Parvati in turn decided this to be given either to, son Ganesha or Kartikeya. They were assigned TASK that, who so ever completes first three rounds of the world, will get gift of fruit. Kartikeya sat on his peacock and quickly flied. While he was taking break at land known as Achleshwar Dham, came to know that Ganesha has already won the competition, who took three rounds of his parents, believing them to be his whole world. Kartikeya got annoyed and stayed back for more time or permanently at this place. Indian religious Politics has not come forward in the last past centuries to develop this holistic location at par with sincerity displayed for Mandirs dedicated to Lord Ganesha. Hindu civilization of Punjab is quite innocent and majority treated negligently by other Hindu India. Lord Kartikeya does not deserve to be relegated to such an insignificant picture in Punjab.

BHAGAT NAMDEVAS’ life is another example on conduct of other Hindustan, who takes Punjabi Hindus for guaranteed and kept mystic silence on his historical intellectual contributions. Namdev was born on the land of Maharashtra, lived life between-1350. He spent his precious 20 years of saintly –spiritual life times in a village Ghoman, situated in Gurdaspur of Punjab. Guru Sahibs incorporated his valuable poetic hymns in Shri Guru Granth Sahib, facilitating automatic status of a GURU. India never came forward to bring out suitable befitting Memorial in his dedication. May be that he was not representing a Brahmin class but belonged to Shudra class. His community was in a profession of a printer of cloth or tailor. Northern India refers them under Chhimba segment. India continues controlled by educated Pundits and yet not matured to value national cross section Indian community INTELLECTUAL HERITAGE. But the Sikh Diaspora remembers all such genius with highest esteem and respect them being natural Guru.

PUNJABIS therefore, must understand interwoven complexities PUNJAB CIVILIZATION historically has undergone regular troublesome periods with unprecedented number martyrdom. They do not require political LESSONS or SERMONS from other India who played divisive role during 1849-1947-1999. Punjabis now understands better; what they have to do or don’t do-Today & in Future. The message after awakening of AMRITSAR displayed in Lok Sabha 2014 may not be forgotten so early. Future may lay new road map and bring in most unexpected political landscape in 2017. Hindu Diasporas of other India must be cautioned to stop playing unhealthy- redundant tactical games, hurting Punjabi civilization. Wish best of luck to the new visitors to Punjab- particularly those representing exploitative Gujarat, the state which co anchored major TRAGEDIES of blood bath in 1947 –for partition of Punjab?